We have no words for things. Rather, words are things that make other things. Concatenated discourses — words in their material aggregation — actively shape more than signification and syntax. Foucault’s principal argument throughout The Order of Things attacks the commonsense notion that words merely represent, or that mimetic functions are language’s sad destiny as medium of communication, after we enter epistemic formations of knowledge that structure such notions. Granting deeper, nigh on originary, primacy to language, as progenitor of ways of being and of making things in the world, he shows us how such a notion arose in shifts between Western historical eras: the Renaissance, Classical, and modern periods.

These coincide roughly with the 17th, 18th, and 19th centuries, to which Foucault’s theoretical approach balances an archaeology of similarities. Where a linear historical account might approach temporal periods through their inherent or apparent differences from one another, this approach forsakes an assumption of such given alterity. Instead, alterity, like similarity, emerges here as a fundamental category of inquiry — how each era thinks through sameness as such provides the problem for Foucault to test. And test he does. Tracing, through archival and aesthetic materials, the ways in which these concepts are explicated in each era, The Order of Things presents a curious set of triadic relationships that are likely to tickle the rest of this series. From one angle — the temporal — these can be expressed as “continuity, rupture, and causality.’ From another perspective — the discursive — the cognate triad would read “difference, change, metacognition.” Their roots are the same, in each case: an epistemic formation, unlikely to reduce neatly into sound bites or blog posts. Briefly, however, this post can review the argument, the first two parts of which appear in neatly isometric visual form below.

In the Renaissance era, argues M.F., epistemic conditions for thought find resemblance through the signature of objects in the world. When (or because or so that) this period gives way to Classical time, those conditions prove insufficient to explain or structure representation. More probing analysis moves thought beyond resemblance towards an ordering of identities and differences. Here,  signs indicate a signified, to be sure, but they also rely on their appearance as language’s signified, themselves, to take on their significance. (I wrote this sentence, and still had to read it a few times. I’m sure it’s accurate, but will rephrase nonetheless.) For the Classical mind, signs — roughly equivalent to statements — definitely point to something outside themselves: the thing they name or imagine. However, Foucault points to this episteme as the conditions from which a material stratum of discourse, recognizable as a force that moves things in the world rather than simply being-like them, can emerge. It is in this Classical age, then, when the patterns of knowledge find self-conscious names. 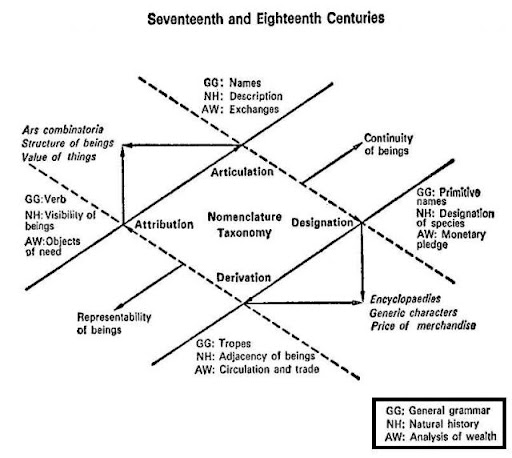 A third formulation of the problematic triad helps organize those names: “life, language, and labor” mark the exemplary categories of knowledge under Foucault’s examination. The study of “life,” natural history, transforms into the roots of the sciences that we still abhor and mystify today. Patterns of “language” grow from rules –  general grammar – into encyclopedic rhapsodies of categorization. To explain “labor” requires more than an analysis of wealth. Indeed, by the time we get our hands on Foucault’s discussion of the same, fully-fledged crises in industrial, international capital have strained its successor, political economy, to intense degrees. Without these shifts in what counts for thought, and their further reorganization at the decline of that Classical period, our expansive stores of information might seem rightly overwhelming.

2 thoughts on “Foucault – Order of Things”