“Genealogy… must expose a body totally inscribed by history, and history’s destruction of the body.” (my translation)

END_OF_DOCUMENT_TOKEN_TO_BE_REPLACED

Whether one accepts straightforwardly deterministic speculation or not, whether one prefers to think the mind and the collective mind as functions of or factors in computing, we are bound by mediating forces. As the paragons of privileged speculation, Marshall McLuhan and Lev Manovich stand unchallenged as the sources for media and software theory in the United States. Their conceptual frameworks are most contentious when held against certain French thinkers’. McLuhan’s insight that all media contain as a message a prior medium finds a counterpoint in Regis deBray’s analysis of media as overlapping paradigms, rather than linear progressions. Manovich’s later contributions to software theory as a field in its own right takes as a direct target the archaeology of media as expounded by Michel Foucault, whose concentration on print and writing as valid archival data severely limits his historiographic impulses. But taking these two Anglo writers’ work on their own, we can unpack just where they stand, as well as their utility and inspiration for contemporary thought. END_OF_DOCUMENT_TOKEN_TO_BE_REPLACED

Here follow annotations on interesting texts that take on the challenge of framing the internet – or aspects thereof – as a cultural object. As this series moves into review, it should not be assumed that these groupings represent a coherent curriculum, but their juxtaposition does provide some opportunities for comparison and contrast among popular theoretical positions on the topic. First, we address some optimisms and pessimisms about the state of internetted and machinic subjectivity. Our cases are from Friedrich Kittler, Jaron Lanier, and Henry Jenkins. END_OF_DOCUMENT_TOKEN_TO_BE_REPLACED

A landmark topical study from Foucault’s early career, History of Madness took nearly forty years before arriving in the U.S. in a full translation. Jean Khalfa’s  magnificent treatment of the sprawling text delivers Anglophone readers more than just extra pages. The differences between Madness and Civilization (based on the 1964 adaptation) and History of Madness (based on the original 1961 version) extend to conceptual nuances as well. In particular, the abridgment of the critique of psychiatry, in Madness and Civilization, flirts with a characterization of madness as repressed genius. But the more detailed argumentation in History of Madness, especially its focus on the institutional disciplines surrounding reason, emphasizes a conscientiously empirical archaeology of reason instead. Still, a central lament, for the loss of unreason after the 18th century, remains in force across both texts. END_OF_DOCUMENT_TOKEN_TO_BE_REPLACED

Foucault’s methodological treatise, a decade in the writing, dismantles and reassembles historiography and epistemology. Rather than treat its object — discourse — as evidence of contiguous historical phenomena, Archaeology of Knowledge (AK) situates discourse as the rules that govern our organization and understanding of historical (as well as political, social, and other sets of) knowledge. At the same time, it describes discourse as a practice that encompasses the very making of those rules. True, then, that this abbreviated forum, as always, would fall short of adequate recapitulation of the book’s themes, let alone to float critique. But we can try:

The frontiers of a book are never clear-cut: beyond the title, the first lines, and the last full stop, beyond its internal configuration and its autonomous form, it is caught up in a system of references to other books, other texts, other sentences: it is a node within a network. END_OF_DOCUMENT_TOKEN_TO_BE_REPLACED

Whether coursing through archival data or meditating on turns of language, Foucault’s early works — the History of Madness, the Birth of the Clinic, the Order of Things, and the Archaeology of Knowledge — each address ways of knowing how and what we think. Based on the approach in those works, we can refocus their efforts onto a tertiary question. While lacking the familiar modulus of power, this approach can still maintain a close attention to the thought of thought as such. It helps elucidate how we conceive of the conditions to this reflexive thought, and thereby to sketch contemporary epistemic limitations. The motivating impulse here, then, is: What exists outside our conditions of possibility of thought, and how can we know it? END_OF_DOCUMENT_TOKEN_TO_BE_REPLACED 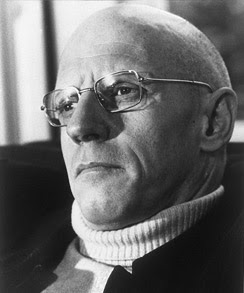